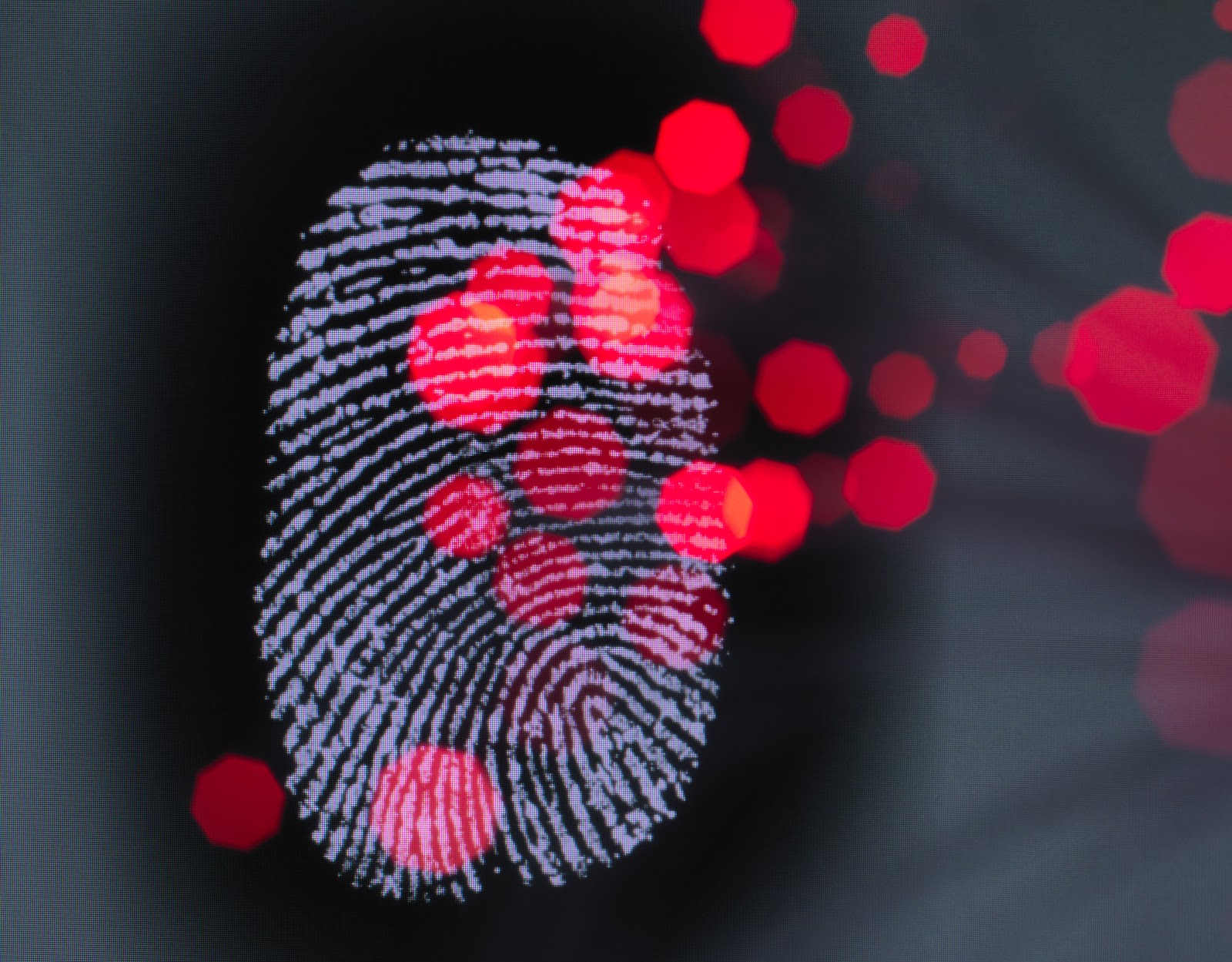 It's a small community with big impact 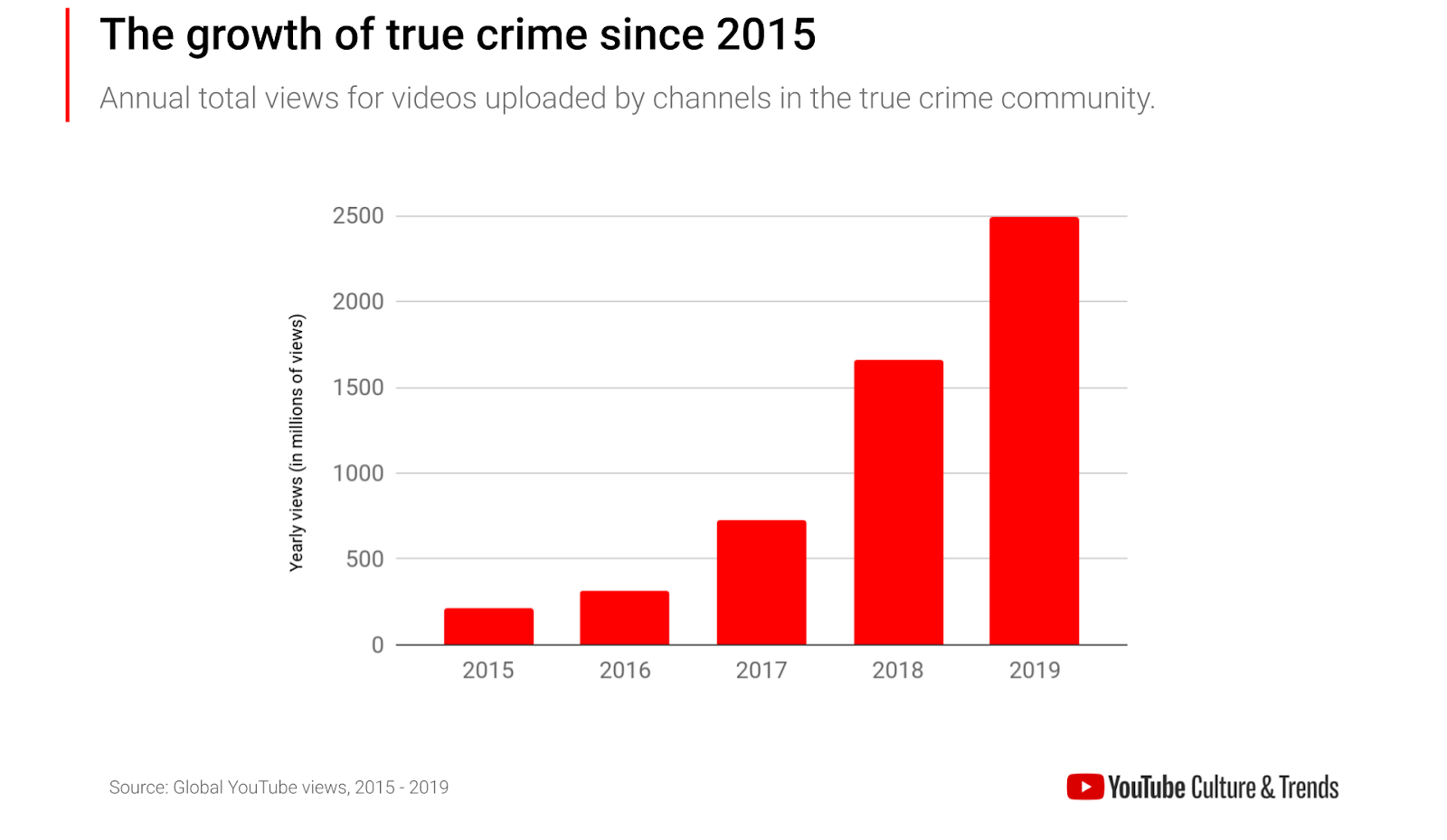 Unsolved mysteries...outrageous wrongdoings...unfathomable murders. Just as they command headlines across the media, their gripping stories and details have fueled the emergence and growth of the “true crime” community on YouTube. This community is a relatively small one, consisting of roughly 340 channels, most of which have fewer than a million subscribers. But its impact has been outsized.

True crime saw a resurgence in U.S. popular culture around 2014 to 2015. Sparked by the breakout popularity of the podcast “Serial” and TV series “Making a Murderer,” true crime has continued to grab audience attention, as seen recently in the viral success of Netflix’s “Tiger King.” And so far this year, search volume for “true crime” has hit an all-time high on Google. 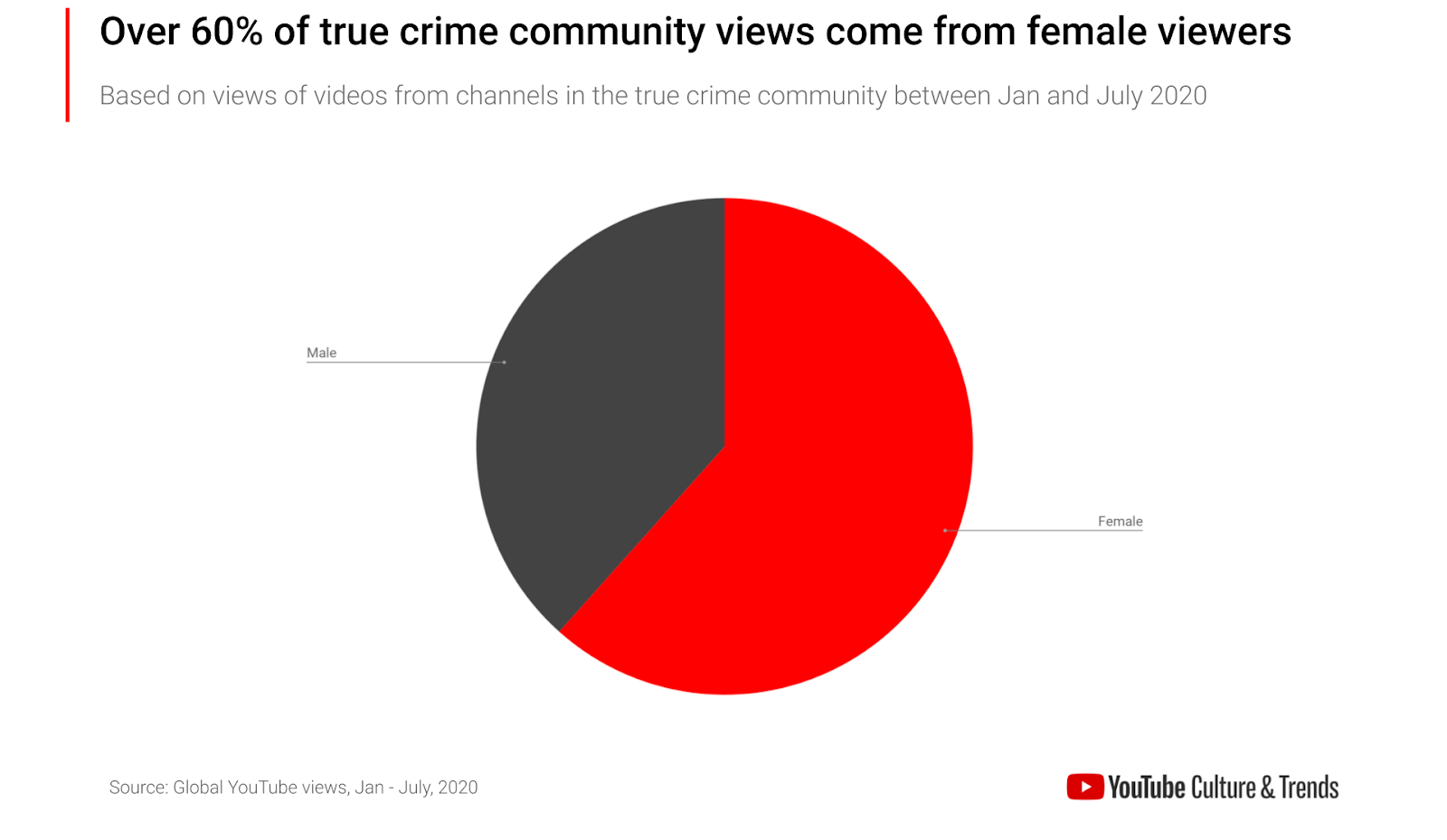 Witnesses to a crime video

Last year, true crime videos were viewed over 2 billion times. But that record is on pace to be equaled or eclipsed this year, having reached nearly a billion views this past May.

It’s not who you think.

From January through July of this year, over 60% of the views of these videos have come from female viewers.

As Earnest Pettie, the Trends Insights Lead of YouTube’s Culture & Trends department notes, “This heavily female audience may be reflective of the creator pool who comprise this community. Four of five of the ten most-subscribed channels featured channels named after the creator, and four of those channels had names traditionally thought of as female names, including Eleanor and Bailey.”

He adds, “And many of these creators migrated to true crime from the beauty community, another community whose audience skews heavily female.”

The result of this unlikely migration was due to a popular style of true crime vlogging known as “Mystery and Makeup.” In this format, creators discuss true crime stories by using the “Get Ready with Me” approach. And as a quick reminder, Get Ready with Me was developed by creators in the beauty community who put on makeup as they “get ready” for the day, all while talking to their viewers. A great example of this mashup format is Bailey Sarian, who applies her morning makeup while discussing murder and strange events, from the Jonestown Massacre to the exorcism of Anna Ecklund.

Sarian’s channel has been frequently imitated by other creators in this space. And Pettie offers a theory behind the popularity of the format: “This growth is the result of creators and their viewers discovering, developing, and sharing their interest in true crime while remaining connected to the interest that initially connected them: makeup.”

Other standard true crime video formats include the podcast and the documentary. Relying on pre-existing footage and narration, the documentary style is especially popular and used by the three most subscribed true crime channels -- Buzzfeed Unsolved Mysteries, Real Stories, and True Crime Daily. Another true crime video format is ASMR. This approach employs the traditional elements of ASMR, such as audio triggers (e.g., whispering and other soft sounds) and personal attention to create an immersive experience for the viewer. You may lose sleep over the retelling of brutal murders by The Empress ASMR, but you will never lose your hearing.

A future in crime

While it’s impossible to predict the long-term future of any video genre, true crime should retain its staying power for some time. At its most basic level, this form of entertainment centers on examining the mysteries of the human mind and seeking to understand why people behave the way they do. We all share these timeless pursuits to some degree, and as long as committing notorious crimes remains equally enduring, true crime will continue to steal our attention.