Keeping it real with the Hacksmith 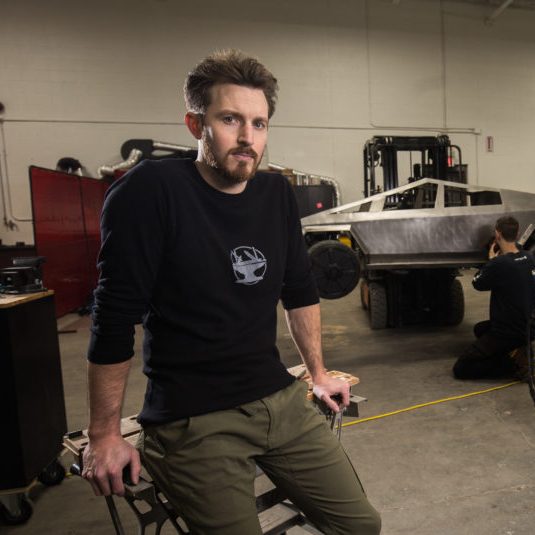 Canadian YouTube creator James Hobson, aka “the Hacksmith,” recently crossed the 10-million subscriber mark, and for good reason. Armed with a degree in engineering, he and his team bring device concepts from popular make-believe worlds to life. We recently caught up with him to see how he’s making science even more cool than ever through his “Make It Real” series.

You joined YouTube in 2006 “to share parkour videos and backflip tutorials” with your high school buddies. Fast-forward to 2015, you decided to quit your corporate job as a mechanical engineer to devote yourself 100% to YouTube as the Hacksmith. What gave you the confidence to make this leap?

James: Basically, it was the year prior -- 2014 -- where we had our first kind of viral video, and that was the Elysium exoskeleton video. That video gave me confidence that there was an appetite online for the kind of zany inventions based off of the movies. After that video happened, I continued working on projects while also working at my full-time job, but it got to the point where I was burning the candle at both ends, and I figured the only way I was going to get out of that was if I tried to give my YouTube channel 100%.

Your YouTube channel’s mission statement says, “We take fictional ideas from comics, movies and video games and make real working prototypes.” With so many worlds and devices to choose from, how do you decide what you want to recreate?

James: Typically, we will try and go for the more popular ones, so we do try and schedule some of our projects around blockbuster movie releases. Obviously, we haven't had too many of those in recent months, but we find it's a very easy way to capitalize on the millions of dollars of the Hollywood studios’ marketing budgets that already go to promote those movies, and it helps push viewers our way on the YouTube platform as well. That being said, a lot of it is still “What do I want to make?” and “What am I excited about?” That’s very important as well, because if I’m excited about building the thing I’m building, it shows in the video, and the video will tend to do better.

While comparisons to Tony Stark come readily to mind — and you’ve even created various prototypes of elements from Iron Man’s suit, including his repulsors — a lot of your work is actually dangerous. Do you view yourself as a bit of a stuntman?

James: We do amp up the danger factor in our videos. It doesn't necessarily mean it is actually dangerous, but we're very good at making things seem more dangerous than they are. We do actually have a safety committee and we plan these things out, trying to think of what's the worst thing that could happen and how could we prevent that. So we are very careful, but I guess you could say I am a stuntman, as well.

You’re also a bit of a teacher, and you’re pretty open about your hope of making science cool and inspiring children to consider careers in the STEM fields. With all their time spent on video games, cell phones, computers, etc., kids today seem preoccupied with technology, but why is it still so hard to get them interested in it for their careers?

James: The problem is the way science and engineering are currently taught. There's not enough real-life and real-world examples of what you can do in these careers and fields. The neat thing that our YouTube channel does is make things from video games that kids are already interested in and from movies they already look up to. Suddenly, we've hit a nerve where there's an element of familiarity, and they're like “Wow, I've seen that in the game, it's really cool,” and then they see someone actually make it in real life and see that it's actually possible with education and engineering. So I feel it's a really good way to inspire youth, because we're able to connect with them through popular culture.

You must get approached all the time with crazy offers to build far-fetched ideas, no? If so, can you share some of the crazier ones?

James: When we started this, we assumed there’s got to be some eccentric millionaires out there who would want to hire us to make something really cool, but we have yet to meet one. We do get an endless supply of requests along the lines of “I have this amazing idea and I want you to make it.” The problem is there is this interesting mindset people have that the idea is all you need. The reality is the idea is actually the easiest part of inventing anything. The issue is actually making it. The majority of inquiries we get are either too far-fetched or completely ridiculous, or people asking us to completely do everything for them at no cost.

In Marvel’s Thor movies, there is a running theme that borrows from science fiction writer Arthur C. Clark’s notion that “Any sufficiently advanced technology is indistinguishable from magic.” Do you believe that?

James: Definitely. I gave a Ted talk a few years ago, where I shared that exact quote. Some of our projects are indistinguishable from magic for certain people in the audience. And because that project is indistinguishable to them, even though it's fully possible with science, it leads them to believe that we can do absolutely anything. So there are some some kind of outrageous expectations from some of our fans of what we're capable of, and it's kind of a compliment, but at the same time, it makes me sometimes feel like I need to do a better job at the education portion of my videos explaining the science of the physics behind things.

Is there any gadget or project that you can’t take on now, but believe you could tackle in 5-10 years with certain advances in technology?

James: The biggest thing holding back more ambitious projects is energy storage, and we're not talking about a small change in batteries. Even if batteries get twice as good or five times as good, it’s not until they’re maybe 10 times as good that I would say there is a paradigm shift in energy storage that enables many scientific technologies to exist. That is the biggest issue with a lot of these inventions: They require a ridiculous amount of power that just isn’t feasible at this time, and it’s definitely one of the biggest pieces of technology holding us back. We’ll never be able to build a full Iron Man suit the way they show it in the movies, but as technology continues to advance, we're gonna get closer and closer to what is possible. And that's probably the thing I'm most excited for: having some kind of armored exoskeleton that can actually turn you into a superhero.

The Hacksmith will be the first to tell you that he has different kinds of favorite prototypes. Here are five that he’s developed/currently developing, along with some commentary:

The Star Wars lightsaber: “The lightsaber is the holy grail of sci-fi tech. The big issue I have with how it’s portrayed in the movies is lightsabers never stop, they never get shorter, and they cut through pretty much anything. So to slice through a thick metal wall with a flick of your wrist, the lightsaber beam would have to be far hotter than the surface of the sun. And if it were far hotter than the surface of the sun, I don’t think you could hold that lightsaber without melting your face off.”

Captain America’s shield: “That project was really responsible for pushing the snowball down the hill for the channel. We went from 100,000 subscribers to half a million in one month, and the channel started doubling in size year after year after that. It was an easy project. At its heart, it’s what we like to call a ‘one-day build.’ It was just a unique application of existing technology with a cool pop culture spin on it with a really fun video that gave the audience the feeling that superheroes are real.”

Thor’s Stormbreaker from Infinity War: “It wasn’t a very technical project in that it didn’t have any electronics or anything fancy like that. But it was very much an aesthetic project that required very fine craftsmanship to make it look cool and make it functional. It’s a one-of-a-kind and I couldn’t reproduce it exactly as it turned out even if I wanted to.”

The power loader from Aliens: “It’s quite possibly one of our most ambitious projects that we’ve ever taken on. We started it a year-and-a-half ago, and we’ve currently built most of the upper body, and now we’re starting work on the lower body. We would’ve loved to do legs like it has in the movies, but the design is not physically possible, because it would have a high center of gravity and it would be nearly impossible for it to walk around, let alone pick things up and walk around. For that reason, we decided to go with a design that uses a tank tread base.”

Inspector Gadget’s helicopter hat: "It's rather dangerous. To put it in perspective: two carbon fiber two-meter long blades about six inches above my head. We have the motors, we have the speed controllers, we have the propellers. It will generate around 500 lbs. of lift, more than enough for me to keep flying for a long time or carry a person or take cargo with me--basically a backpack-mounted helicopter, all manually controlled with your bodyweight. Part of the reason we haven’t done it yet is that it needs a lot more engineering time and care put into it than we can typically afford to do for a YouTube video, since we’re trying to produce videos on a weekly basis.”