Learning to spot infant seizures with the help of YouTube

Learning to spot infant seizures with the help of YouTube Stephanie committed herself to finding out everything she could about her newborn son’s condition. Quickly, that research turned to YouTube.

When Stephanie Balderamos gave birth to her son Aaden, it was love at first sight. But almost immediately, the joyous mood in the room changed: Doctors told Stephanie that her son had a rare genetic disorder called Tuberous Sclerosis Complex, or TSC, which causes tumors to grow on the vital organs of the body. For baby Aaden, it affected his eyes, heart, kidneys, and brain, which they warned could lead to seizures.

But because TSC only affects about 50,000 people in the United States, it was initially difficult for Stephanie to find the information she needed.

“I was sent home with my baby but had no idea what to expect,” she says. “How would I know what a seizure looked like if he had one?”

So Stephanie committed herself to finding out everything she could about her newborn son’s condition. Quickly, that research turned to YouTube.

“I first looked up videos a few weeks after receiving the news of my son’s diagnosis,” she says. To learn how to spot a seizure, “I searched for ‘infantile spasms,’ which are the seizures babies usually get at first with Tuberous Sclerosis.”

Stephanie’s preparation paid off. When Aaden was four months old, he had his first infantile spasm.

Stephanie recognized it immediately from YouTube, and knew how dangerous it could be to his brain if not treated in time.

“So I rushed him to the E.R., pushed to get him admitted for monitoring,” she says. But after several days in the hospital, where Aaden continued to seize, the doctors were at a loss. The scans showed no evidence of seizures, they said, and they wanted to send Aaden home.

But Stephanie was sure what she was seeing.

“I knew from watching these videos my son was having seizures, and I cried and begged for another doctor to read the scans before discharging us,” she says. Finally, a new doctor came in and agreed with them, and Aaden got the medication he needed to treat his seizures.

Even with the medication, however, Aaden was still having 2-10 seizures a day, so Stephanie continued to research. Soon, she found the YouTube channels of two respected, established organizations for people with TSC, The Epilepsy Foundation and the Tuberous Sclerosis Alliance.

“Those are the two major foundations of my son’s diagnosis, and they have so much helpful information,” she says.

YouTube armed Stephanie with the information she needed to be her son’s biggest advocate.

Stephanie also watched videos of first-person accounts of seizures to help her understand what her son might be feeling.

“My son was too young to tell me what a seizure felt like, so I watched a video of a teen describing what she felt during an episode and that taught me how to help my son be somewhat comfortable during his,” she says. “Just searching for ‘seizures’ was helpful as well to study what different types of seizures look like in children and adults. It was very helpful for me to be able to see so many videos from different individuals, because not all seizures were the same.”

YouTube armed Stephanie with the information she needed to be her son’s biggest advocate.

“Aaden’s neurologist has said that he is so impressed by the way I know he is having a seizure or when one is about to come on,” she says. “Some seizures are very hard to tell, but from research and just knowing my son, I know what’s ‘normal’ and what isn’t for him.”

With the knowledge she gained from doctors, YouTube, and her own experience, Aaden’s care continued to improve, and eventually he was deemed to be a good candidate for brain surgery. At just three years old, little Aaden had a right temporal lobectomy — and has been seizure-free ever since. 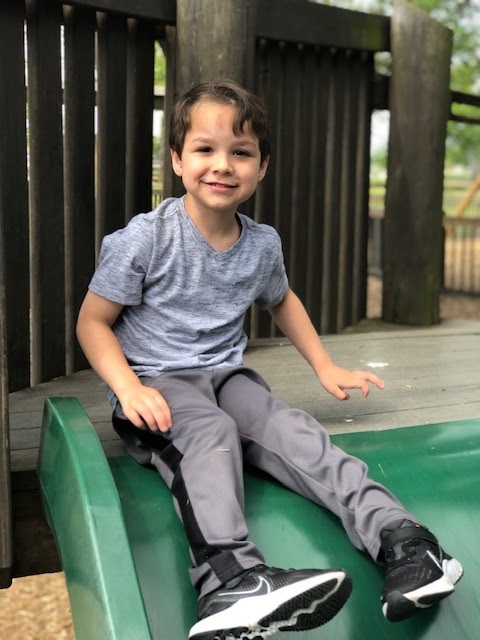 “Aaden is now 5 and thriving,” his mother says. “Of course with his diagnosis, he is still developmentally delayed and is seen by many specialists, but he is so much happier living a full life, seizure-free!”

After this experience, Stephanie says she’s considering launching her own channel to help other parents in a similar situation. “I would love to be able to help other moms walk through their journey with epilepsy or Tuberous Sclerosis. We all need advice when it comes to our children’s health and also support going through this journey having medically fragile children.”