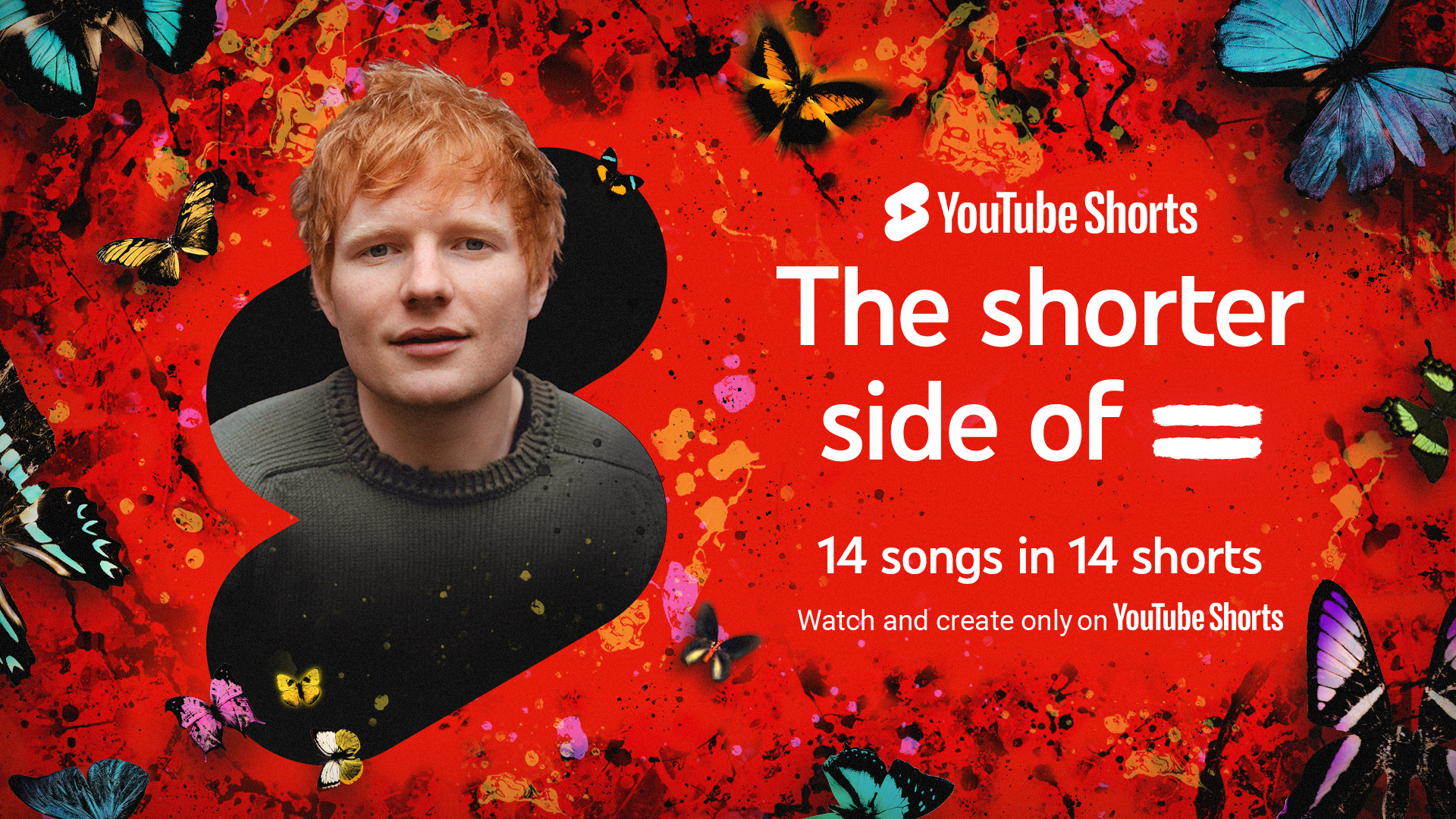 14 Songs in 14 Shorts: Watch and listen to the full preview now on Sheeran’s Official YouTube Channel

Today, GRAMMY Award-winning and YouTube record-breaking artist Ed Sheeran unveiled 14 YouTube Shorts, giving fans the first full preview of his forthcoming album “=” (Equals), only on YouTube. “=” is the fourth installment in Sheeran’s symbol album series, and he is giving fans a first-ever album preview on YouTube Shorts with a glimpse into all 14 tracks ahead of its official release this Friday, October 29th (Asylum/Atlantic). What’s more, fans around the world are now able to watch and create their own #SheeranShorts to every track on the album.

The 14 Shorts encapsulate the very personal journey of Sheeran’s album — four years in the making — with each one bringing to life the intimate and everyday moments that are reflected in the songs. Sheeran is giving fans a short, intimate look into what each song on “=” means to him, such as stepping into an ice bath in “Shivers,” to having a solo dance party in “Be Right Now,” to taking an outdoor shower in “Stop The Rain,” playing a mini ukulele in “Sandman,” and simply hanging out with his family at home in “First Times."

“ I had a really fun day shooting my YouTube Shorts. I’ve always really enjoyed the music video process, so it was fun to explore a new way of doing that by channeling each song’s theme in a unique way, while also giving you a sneak peek of the album!”

“From day one, I knew Ed and his music would have a lasting, global impact and that remains true today,” said Lyor Cohen, Global Head of Music at YouTube. "Ed Sheeran is a storyteller and I am so stoked he is using YouTube Shorts to give his fans an audio and visual preview of his incredibly powerful new album. This is going to be an unforgettable moment.”

Sheeran’s presence on YouTube has been extraordinary since his first video upload in 2006. With the help of his global fan base, Sheeran has become one of the top 10 most-subscribed-to artists on YouTube. To date, he has four videos in the Billion Views Club including “Thinking Out Loud,” “Perfect,” “Photograph,” and the record-setting “Shape of You,” which is the second most-viewed music video in YouTube history and the second fastest to reach one billion views. This year alone, Sheeran’s music has charted in over 45 markets on the platform, and over the last 12 months, he has earned a remarkable 3.9+ billion views globally.

Ed Howard, Co-President, Atlantic Records UK added, “We are thrilled to see Ed’s collaboration with YouTube come to fruition and to build on Ed’s long-standing relationship with the platform. The extended Shorts series not only provides us with an innovative way to preview the breadth of the new album sonically, but the short, bespoke films help showcase the narrative of each song in a fun and authentic way. We’re excited to see it ignite his fanbase on a global scale.”

Julie Greenwald, Chairman and COO of Atlantic Records remarked, "Ed’s a master at everything he does – whether it’s in the studio, on stage, or in the amazing series of videos he’s made over the past decade. He’s a charismatic storyteller, and YouTube Shorts is a great platform for him to give the world a sneak listen to his brilliant new album.”

To discover the ‘=’ album preview on YouTube Shorts (on any mobile device):

How to create your own #SheeranShorts (on any mobile device):